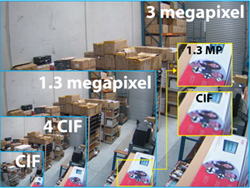 As well as our standard analogue CCTV solutions that we provide, we can also provide you with state-of-the-art High-Definition (HD) Megapixel CCTV systems, giving a resolution at least three times greater than its analogue counterparts.

For the consumer, it may be difficult to differentiate between megapixel and analogue, and the varying differences in cost and image quality. Here, we will give a brief overview:


In the example of a 2-Megapixel camera being compared to an analogue camera, the resolution is 5.5 times greater! This allows for a clearer picture, gaining far more detail than would be possible with an analogue system - ideal for identification of people and objects.


It isn't always easy to understand the difference in quality simply with a list of facts and figures - here we will provide a few example images from each type of camera and their corresponding resolutions:

The above image clearly demonstrates the amount of detail available in an IP Megapixel system over a standard analogue system. To be clear, the above image has been shrunk in size in order to fit it on to this web page.